Short term goal is to complete my first half marathon on April 27th. Catalyst to make me successful is the gradual build in distance of the Louisville Triple Crown series. Bad news is the Rihanna concert falls 2 days before the Rodes City 10K. Thanks to awesome websites like Running in the USA and Active.com, I was able to find a comparable distance of 5 miles around Walled Lake in Michigan.

The challenge was how to enjoy the “Unapologetic” nature of my girl RiRi and be physically strong to run my best. One advantage was having a day of rest between the two events. Rihanna made Detroit “shine bright like a diamond” in a sold out Joe Louis Arena. 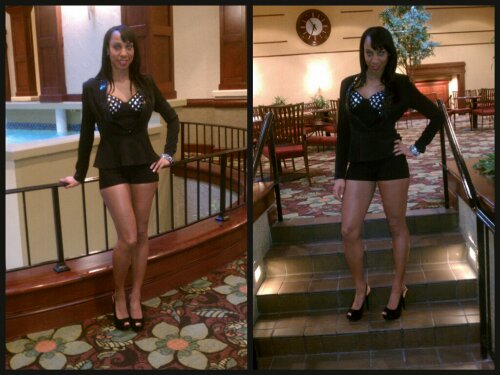 I gave myself plenty of extra rest the following morning which is a rare occurrence with my active lifestyle. It was not feasible to prepare Grandma’s Tuna Surprise, but I was able to eat it earlier in the week. This gave me peace of mind knowing I was following a pre race tradition. Friday night, I savored an order of Sweetwater Tavern wings and garlic fries.

Boom! Saturday morning I wake up to this:

The reason I left Michigan!

The weather has been unseasonably cold in Louisville and I trained for this race by getting up at 5am and taking runs with my reflector vest. I was expecting colder temperatures around the water. I layered 3 jackets over my shirt and opted for leggings instead of shorts. The shoes were a no brainer. I lucked up on a pair of Asics Gel Kinsei 4 at the Zappos Outlet for 65% off retail price.

Upon my arrival, I was impressed with the convenient parking and late packet pick up process at Bayside Bar and Grill. The Passion for Life Organization gave out a good quality Dry Fit shirt in a bag with a bunch of coupons. I wasn’t expecting a bag. Passion for Life is a charity which selects an inspirational family every year to help out with medical expenses and donates money to the UofM C.S. Mott Children’s Hospital. According to the Passion for Life Founder/CEO, “the run is the largest participatory and largest grossing charitable run in Michigan this month.” There were a lot of local students from various sports teams who sacrificed their Saturday morning to contribute to this cause. It’s wonderful to see young people take part in community activities with the support from their parents.

I had an hour to kill before the race and I took time to gaze across the lake and think to myself about how large it looked in person. This was also a good time to take photos and scope out my completion.

5 minutes until the start and it was time to be assertive and get towards the front. I shed my three jackets (reason for stomach bulge in photos). Jogging in place helped to get my blood flowing and I was ready to get the show on the road. It was refreshing to have an eager group of starters. 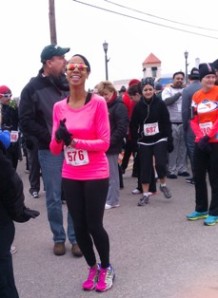 Race is underway and the 5k turn around was at the 1.5 mile mark. The crowd thinned out a bit after that point but I was proud I took the challenge to run the longer distance. When I imagined this route, I was thinking it would be a simple oval shape. The route was ever-changing terrain with side streets, main streets, sidewalks and grass. I hit a patch of ice on the side-walk but the woman in front of me alerted me and others by calling out “Ice!” It was cute to pass by lake front homes and hear different barks from so many dogs. I was giving them nicknames similar to what Nicki Minaj did to contestants during American Idol tryouts. Anything to keep my mind distracted from the exertion.

I observed Weeping Willow trees and reminisced on my childhood when Brad and I pretended to be Tarzan complete with the yell and all. I was feeling good and focused. I got passed by a few people and didn’t like that feeling. Now I’m getting pissed. Where is the finish line so I can kick up to high gear? No end in sight and I was scared to look across the lake just in case I was far off from the finish. I asked a patrol cop, “Are we there yet?” in an exhausted tone. His reply was “Almost.” I saw what I thought was the top of the Bar and Grill and turned it up a notch. I realized I was close and switched to anaerobic mode. I could sense someone was close behind but I never look back. I kicked and kicked until I hit that finish line. The cheers from spectators and earlier finishers were so motivating.

I was greeted by a woman who told me I did a good job and I made her run but she couldn’t catch me. She told me she thought I was a high school senior or a college runner. I told her my age and she shared that she was 38 and a mother of 4. I give major kudos to this woman for being active with 4 children. She finished about 18 seconds behind me.

Final results for Passion for Life 5 mile:
38:02
#4 out of 36 in age division.
#30 out of 201 participants.
I was pleased with my performance. Now that I have conquered Walled Lake, there was time for one more photo:

Therapeutic Foster Parent, Teacher, and Runner who believes that life is what you make it. Envision, Empower, and Educate.
View all posts by Kelsie Lou →
This entry was posted in running, Uncategorized and tagged 5 mile, 5k, MI, Passion For Life, Walled Lake. Bookmark the permalink.

A lot about nothing; sometimes about something

A guide for all aviators to build on their knowledge.

A Step by Step guide for gradual weight loss.

Travelling is a good way to make your life different as well as fitness and a balanced diet.

This is Marilyn Gardner Milton's blog about all she loves.

Today's generation is financially illiterate, so I am going to attempt to change that one person at a time.

Thoughts By A Wallflower

My Take On Life

My experiences in Italy and the world

Life in Copenhagen, Denmark, after moving during Covid-19.