If you have never been to Detroit, you may have a negative view of the city surrounding the high crime rates, the Kwame Kilpatrick scandal and one of the worse examples of urban decay in our nation. You may have seen a funny and sometimes ratchet side of the city from the show Hardcore Pawn. The show Man v. Food shed a spotlight on two well known Coney Island Restaurants. Regardless of your view of “The D” the city has a lot to offer during the summer months. The quality of life is beautiful in Louisville, but after the Derby excitement, I tend to look elsewhere to keep myself entertained.

6 out of 40 homes occupied on Minock Street off Schoolcraft

I describe myself as a running nerd. A running nerd is person who will plan a trip for entertainment or family and friend purposes and look up races during the time they are in town. If you are about that life, then you are a running nerd also. I was joyful to find a race in downtown Royal Oak which has a vibe very similar to the Louisville Highlands. They added a 5k this year which I knew would be easy so I challenged myself for the 10k. This is a distance I have never raced due to missing the 2nd leg of the Triple Crown series. With only 4-5 hours of sleep the night before with an order of Sweetwater Wings, I was not trying to break any records. Waking up at 5:30 was good enough! 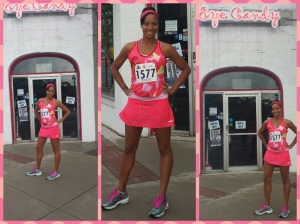 After a huge breakfast, relaxation in the whirlpool, and a quick recovery nap with my new, CEP Calf Sleeves, I was ready to hit the streets with my brother Jason. I was so happy that he wanted to hang out with me but I was a bit worried that he would be in pain from all the walking. He still has complications from breaking both arms and legs, spending 10 days in a coma, and 6 months in rehab from a horrible motorcycle accident on 7 mile almost 18 years ago. This is one of the reasons I don’t care for fast toys unless it’s a spin bike!

There was so much going on with the Grand Prix races on Belle Isle but we decided to hit up the Hoedown. Whoo Hoo! I also wanted to expose my foster daughter to more of what Detroit has to offer in terms of diversity. The tickets were $25 but we each walked out with fun memories and about $50 worth of freebies. The vendors were so nice and very generous. I loved the fact that the setting was moved from Hart Plaza to Comerica Park. It wasn’t overly crowded and plenty of room to mingle.

I went over to the Marine’s Tent and browsed the prizes. I wanted a shirt which meant I had to hang with my chin above the bar for 70 seconds. I won the shirt like a true champ and felt like a super star with the small crowd which gathered and watched with envy. Next up was a Ram obstacle course experience. This is another benefit about the Motor City. You get to see all the latest and greatest in the automotive world. There was a Red Wings player signing autographs but we didn’t get there in time to meet him.

Detroit is so awesome for having NHL, MLB, and NFL in centralized locations. There is something to do year around and this is what Louisville is lacking with the main focus being on the Cards. After leaving the Hoedown, we went to Lafayette Street to grab some Coneys. I ate two along with an order of Chili fries with cheese. Just recently, Lafayette Coney was ranked eleventh best hot dog in the entire country according to The Daily Meal website. The American Coney place is bigger and appears cleaner but it didn’t even get ranked. “Whatdahave?” I suggest doing what my friend Maxie does by ordering one from both and you be the judge.

Sunday greets me and I wanted to visit my old church, Word of Faith, but I needed some rest. For lunch, I decided to have a deep dish, meat lovers from Pizza Papalis on Greenfield. I have loved this place since high school and it never gets old to me. Speaking of high school, the main purpose of my visit was to celebrate the BaBee shower of my best friend from high school. The 14 year Chrysler employee and entrepreneur of Piece of TajRee Delectable Desserts is expecting her first baby on July 20th! I was so happy when she told me the news back in December. I designed and handmade a four tier, 115 count diaper cake with her color scheme. I normally don’t get into the mushy baby shower stuff but it has been an honor to share this special time with my Day 1 friend. She is such a lovely, hardworking woman and I know she will be a Queen Bee Mommy! I Love you Tajuana!