Jim Herrin was the President of a running club called Robins Pacers down in Centerville, GA.  The group sponsors a 5k/10k in his memory with the proceeds going towards a track scholarship for one male and one female HS senior.  Pretty good cause huh?

The only thing I knew to expect with this race would be heat and humidity.   I always read on http://thedancingrunner.wordpress.com/ how Chelsea gets her run on with tripple digit temps and high humidity.  I admire her for hard efforts plus teaching spin.

This race was scheduled at 7:30 which is normal for a race but super late for runners who beat the sun to train. One of my running buddies, Lori was just talking about how humidity does not allow the body to cool itself because it prevents the sweat from evaporating. Nevertheless, I needed this 6.2 miles to make up for my 9 mile group run I was missing in Louisville.

When I saw 93% humidity I was thinking about ditching my running top.  I asked my Foster Daughter if I would look OK with out it and she gave me a boost of confidence.  I borrowed her pink studs and threw on some lip gloss and made my way to the Galleria Mall.

I went inside for packet pick up and Robins Pacers had a well organized event. I was not expecting a tech shirt for a $18 registration fee.  The awards table was set up and I was excited to see trophies as opposed to medals. I was gunning for top 3 overall for one of the big trophies.

Finally, we line up and I was surrounded by a lot of high school athletes and spoke to some of their parents.  My main concern was being able to follow the 10k route and not getting lost in the Eagle Springs residential area.

I held onto second place for the first 2 miles.  My first mile split was 7:15.  I skipped a water stop at mile 2 and that was a mistake I felt up until mile 4.  It was around that time when the black cap wearing lady passed me.  The leader was way ahead and I knew there was no catching her.  I’m holding 3rd place until around mile 4. Oh Snap!  I hear someone behind me.  NEVER looking back, I kept going as the sun continued to beat down and the southern directions of the race produced a head wind.  I hear the steps gradually approaching and I thought please don’t let it be a girl.  Out my peripheral, I saw a ponytail swinging.  At that point I knew if I wanted that 3rd place I would have to fight.  We stayed with in a couple strides of each other for a half mile.

The course had very little shade and my Smoot Stride was not holding up to her shorter, swifter steps.  I maintained my form and relied on my core.  Being shirtless helped me feel my abs working and focus on that energy.  Having the Garmin helped a lot because I was able to use that as motivation of only having so far to run.  I kicked hard for the last .25 and crossed the finish line with boldness.  Several people congratulated me and gave compliments on my pace.  What a great feeling!

As I rounded the final turn, I saw a group from Black Girls Run cheering on finishers.  This was my first time seeing them in action and they looked so good in their pink and black.  I met Deshala who is the leader of the Central Georgia group.  We chatted about chapter start ups so hopefully something can get popping off in Louisville soon.

One of my photos had the overall women’s winner so I have to show her some love and give credit where credit is due.  I expect my legs to be cut like hers by the end of marathon training.  It was cool to see a school spirit award to help keep sportspersonship alive. 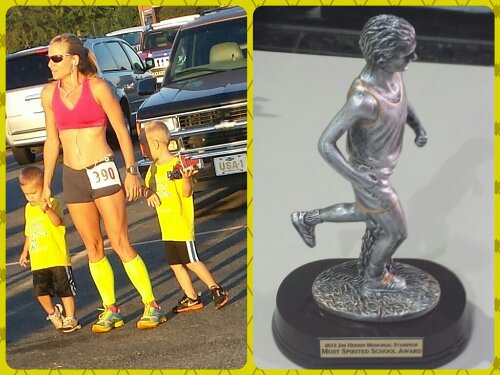 I forgot to stop my watch so my guesstimate is 47:50.  That was good enough to earn 12 place overall, 4th place women’s and #1 age group.

The biggest reward is comparing my fitness level to the Hooters race in Clearwater last September.  I remembered how intimidated I was of the “sports bra running chicks.”  I am now that chick.

Therapeutic Foster Parent, Teacher, and Runner who believes that life is what you make it. Envision, Empower, and Educate.
View all posts by Kelsie Lou →
This entry was posted in running and tagged Running. Bookmark the permalink.

Enjoying Life in the Ozarks