Run The Bluegrass Half Marathon Recap

Run The Bluegrass Half Marathon has been on my race radar for a few years.  I took a lot of photos and kept mental notes to share with readers how RTB earned the “America’s Prettiest Half Marathon” title. 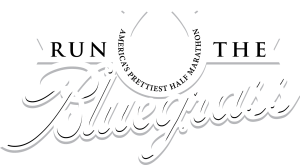 The Keeneland Entertainment Center was the location for the RTB Expo. I’ve driven by Keeneland several times, but this was my first time on the grounds.  The area was clean and well-manicured.  The parking is tree covered and the signage looks very classy as it should being a National Historic Landmark.

The medals were on display as soon as you walked in the Expo to give your bib number. Volunteers gave out bags with the customized bibs and official race guide.  The first thing that caught my eye was a photo area provided courtesy of Derby City Selfie.  They had several props and backgrounds to choose from.  The photo was printed and accessible digitally via SMS or Social Media.

Every workout is my therapy.

After the photo area, the official RTB merchandise was on display and a bourbon was available with special glasses. I moseyed pass the merchandise and found the Bondi Band table.  It was nice to see some updated phrases and patterns.

My first time in a horse starting gate.

Next, I picked up some Salted Caramel GU and 2 pairs of cushioned Feetures.

The last stop before leaving was to get my light weight hoody. The shirts are unisex and I ordered a size small which fit perfectly.  This is my first race shirt that does not have all the sponsor logos on the back.

Parking was not hard due to arriving an hour before the start. There was a little backup on New Circle to get off at Versailles Road.  There was a heavy police presence to help direct traffic. I turned and parked inside Gate 2.

A serious matter was deciding what to wear. Thankfully, there was no rain in the forecast.  The temperature was calling for 42° with 8 to 15 mph wind chills that would make 42° feel like 35°.  Another factor was the start time being at 9:00 a.m. and the amount of sun before my 2 hour projected finish.  I had 4 outfit combinations in the same color family to make last minute changes drama free.

I almost changed when I saw other runners in shorts. I would not be racing this event due knee flare ups that could prevent me from running 26.2 in 4 weeks. I compromised between tights and a tank.  I used a Hooters race shirt as my throw away layer.

The gear check was right behind the starting corrals and that was my last stop after a nervous stop at the porta pottie. My bib number started with a 2 to designate I would be in corral #2.  We were waved off at approximately 9:12.

Runners were greeted by our first hill at .4 miles. Based off my photo you can see that the incline is very gradual. 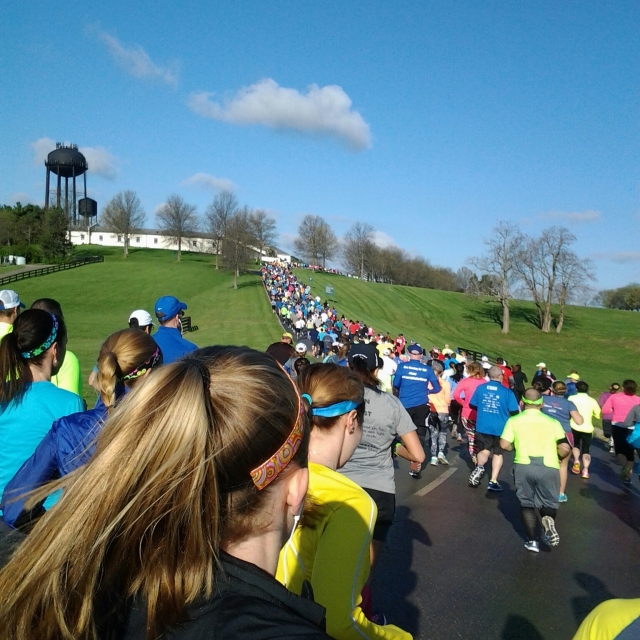 Up, down, and around.

I see horses! There are so many farms we got to run pass that I will not try to remember the names and locations of everything. These horses were off to the left around mile 1-2. 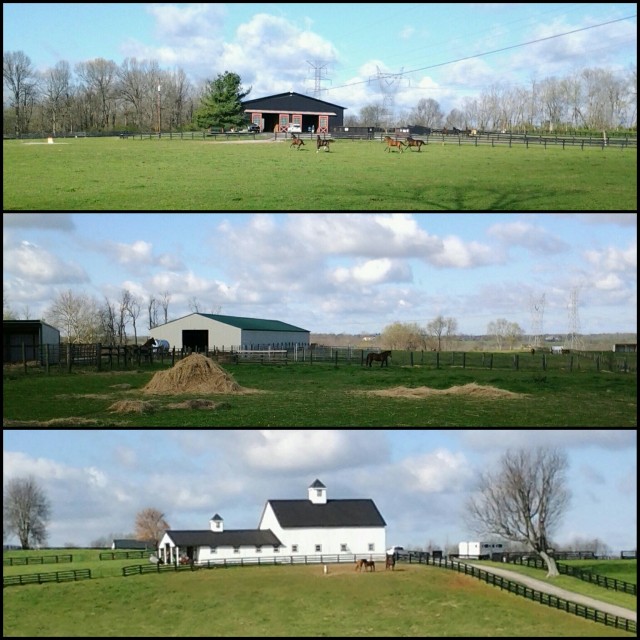 The views were amazing.

There were hydration stations about every 2 miles. Sword was the official RTB drink.  I normally do not try different hydration during races but since this was a training run I wanted to sample.  Sword Hydration is something I will consider training with in the future.  The taste was good and I didn’t experience any side effects.

The course rolled along and I began to think the hills were not that bad. I kept my pace in check for any surprises in elevation.  The scenery was enough to distract me from hill work.  Around mile 4 is when I felt warm enough to ditch my Hooters shirt and gloves in the trash at a hydration stop.

The hills will keep you warm.

Participant notables were a group of Marines on hand cycles. One was visually impaired and being guided by a double amputee athlete.  They showed a great deal of will power to get up and down those hills.

At the midway point, the sun was starting to beam. For a split second I wanted to have shorts.  There was nothing I could do about it at this point.  I kept snapping pics and I would catch up to people who left me and sometimes pass them as they ran out of juice on the hills.

Mile 9 was approaching and I heard people at the start saying how hard it was. Last year it was dedicated as Meg’s Mile for a runner who was killed by a drunk driver while training with her husband.  There are too many incidents of distracted drivers killing runners that maybe this mile could be a dedication to all of them to raise safety awareness. I sent a Run in Peace prayer up to Meg as I got in formation for RTB’s hardest incline.

When I looked up, I thought “Oh, this is nothing.” The incline wasn’t even half the elevation I do on my hill repeats.  I just ran 8 repeats plus 2 miles on Tuesday so this was light work.  At the top of the hill was a drum group lead by Tripp Bratton.  Their music was enough to carry me around the curve and hit another hill!  I read a sign that said “started from the bottom now we’re here!”

Between mile 10 and 11 there were about 7 horses running along the fence. I saw a pretty white horse I wanted to get a picture of.  That was my motivation to get up the next hill. 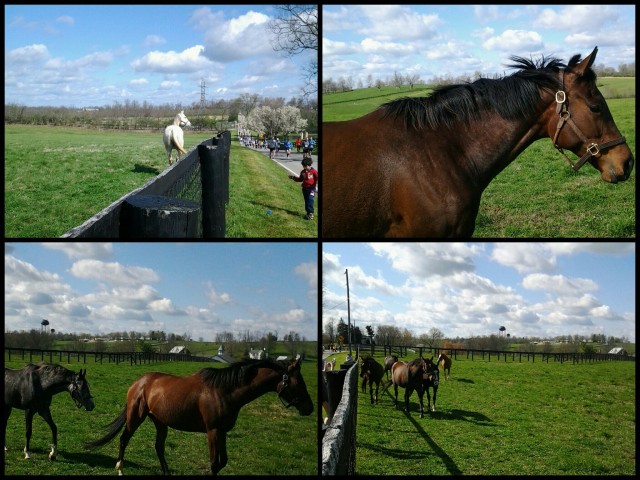 I think they enjoyed us just as much as we enjoyed them.

The white horse ran pass me so I decided to take a selfie.  Out of nowhere I felt some warm air over my right shoulder.  This horse snuck up on me so fast and I could not believe how peaceful this encounter was.  When I got back on the course, this horse and a few others ran with me along the fence.  This experience plastered a smile on my face as others complimented me on how good a photo it was. 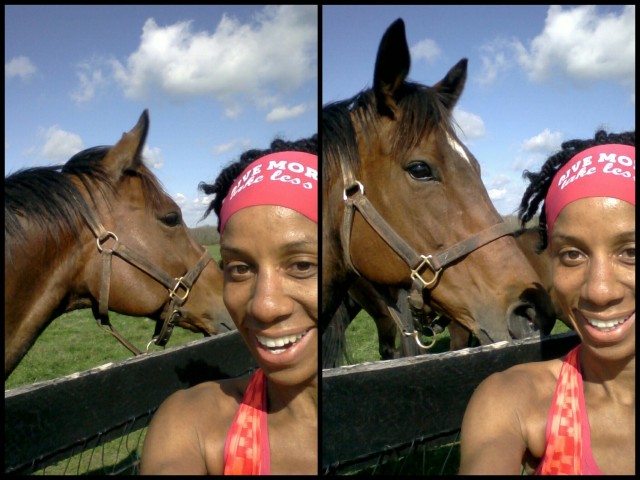 Posing with horses during a half marathon = priceless.

From that point, I figured less than a 5k so pick up the pace. My knee was not bothering me.  I wanted to empty the tank and slay the last 2 miles.  Plus, the terrain had leveled out.  I thought the hills were over until I hit mile 12.  Really?  I decided to power up this last hill and still finish strong.  I could hear the finish line and the crowds thickened as other racers for the 7 miler and the Yearling were mixed in the course.  I passed a sign that said Final Furlong.  I would have snapped a pic but I was running too fast.

Finish Area photo taken the day before.  This are was packed with spectators, food, drinks and music.

I was surprised to see so many people at the finish line cheering on finishers. My shorter mid-week runs helped with my finish sprint.  I used visuals from my local route to imagine how close I was to the finish.

A volunteer gave me medal which is the 2nd heaviest of my collection.  I received a goodie bag of snacks.  There were some bananas off to the right and I decided to pass on them when I saw chocolate!!   Whoever came up with this idea is genius!  Turns out they were Bourbon Ball donuts that do not go on sale to the public until Wednesday at Thorntons in Lexington and Louisville.  The 1% chocolate milk was the perfect pairing.  As much as I love pizza, I gave my pizza coupon to a couple along with the beer coupon.

As I was munching on this confectionary miracle a Veteran came up to thank me for trailblazing the path for him to run his first sub 2:00 half marathon ever! He saw me at mile 11 and followed me to the line and he told himself he had to find me and thank me.  Shout out to Green Cawood who traveled all the way from Arizona to Run the Bluegrass!

My overall finish percentile was top 12%.

Times for each segment:

My last two miles were 7:58 and 7:35. Looking at the above data from Scott at On The Mark Sports, I passed over 600 runners in the second half with 300 of them being female.

Killed the Hills…and the donut.

Final Thoughts: Run the Bluegrass surpassed its name of “America’s Prettiest Half Marathon.” Race director Eric and his crew did a fantastic job. The hills are not bad if you are properly trained and use correct form.

The following items will allow you to run the course and not let the course run you:

Half Marathon #9 in the books!

Racing with the Legends: Man O’War, War Admiral, and Seabiscuit.

Therapeutic Foster Parent, Teacher, and Runner who believes that life is what you make it. Envision, Empower, and Educate.
View all posts by Kelsie Lou →
This entry was posted in fitness, half marathon, health, Lexington, running, Travel and tagged Bourbon Ball Donuts, half marathon, Horse Capital of the World, Horse Farms, Horses, Keeneland, Run The Bluegrass. Bookmark the permalink.

12 Responses to Run The Bluegrass Half Marathon Recap

In Search of James

Doing the best you can with what you got

Life & All The Things In Between

The Power of Words

Musings of a Millennial. Life, The World and Everything In Between