For 2016 I wanted to follow the same Norton Sports Health training plan that prepared me for a 3:39:51 Boston Qualifying finish at the 2015 Kentucky Derby Festival Marathon. I rarely repeat the same race for longer distances, so I needed to find a race that corresponded with the training timeline.  The Cincinnati Flying Pig Marathon is always the 1st Sunday in May.  It usually falls on the same weekend as the Kentucky Derby which is always the 1st Saturday in May.

The Flying Pig has been on my radar ever since an enjoyable time at the Queen Bee Half in October.  I would have the advantage of being familiar with parts of the course that are shared by both races.

Here is a recap of my Flying Pig experience:

In February, I asked my Mom to check on comps at one of the Horseshoe Casino’s host hotels.  Thankfully, the same hotel we stayed in for the Queen Bee had rooms available.  I was not registered for the race at this time, but based off experience I know to get the rooms booked early.

Mom and I drove in the rain from Louisville straight to the Duke Energy Center.  Downtown Cincinnati was on jam!  We parked in a lot across the street for $10.  Street parking was scarce and the garages wanted $20 for “Event Parking.”

There were painted pigs on display sort of like the decorative horses around Louisville. The first stop was to bib pickup.  Like most expos, the layout was designed to have you walk through the vendors until you reach the shirt pick up in the back.

Proctor & Gamble is one of the top sponsors and they were very generous with feminine products and laundry detergent samples.  Volunteers were generous with bottled water.

I saved about $40 off registration fees by utilizing a discount code courtesy of Melanoma Know More. Their partnership with the Flying Pig sends a portion of registration fees to support their mission.  I stopped by the booth to say “Hello” to the volunteers and they gave me a shirt.

After I found my salty caramel GU packs, I went to the back of the expo for the official race shirt, poster and bag. The poster came in box with a design identical to the cover of the event guide.  The half marathoners were given a 13.1 sticker.  I’m not sure if they received a bag or not.

Something caught my attention and it was a 360 ̊photo booth. In six seconds the cameras captured this matrix like video:

We made it to the hotel and chilled for a moment. The news was broadcasting info about the weekend Pig events.  We caught a shuttle to the Horseshoe for dinner.  I decided to test my luck on a penny machine that had a unicorn on it.  After a few spins, the slot machine went into a bonus round of 36 spins, then I caught a 4x jewel, resulting in a cash out covering my race fees and weekend expenses!

Mentally, I was prepared for a total wash out. The only thing I feared was a thunderstorm that would halt the race completely, leaving thousands who have trained with out an event.  It rained on and off all night.  In the morning, there was a steady drizzle that was expected to clear.  I sported a trash bag poncho to the starting line. Race start temperature was about 60 degrees and hit the low 70s by the time I finished.

A challenge with having a race start (Smale Riverfront Park) and end (Yeatmans Cove) in different areas is deciding where to park. Do you want to walk more before the race or after the race?  I thought it would be wise to get a carpool pass at the Expo and park in the Longworth Hall lot.

It was a short walk to the Paul Brown Stadium near the race start.  After the race, there were school buses lined up along Joe Nuxhall Way to drop off at the Longworth Lot and area hotels.  It seemed like the walk took forever because I had to walk to the left of the finish line to retrieve my baggage claim and cross back by the finish area to find the shuttle buses.

Porta potties were in abundance one street over from the starting line. This is what it looked like at 5:30 a.m.  At 6:15, there were lines 10 deep.  I was in line when a lady came by saying there were no lines at the opposite end.  I took off jogging to relieve myself one last time.  I was told there were porta potties in each Corral or Pig Pen as they called them, but I knew those would be packed. 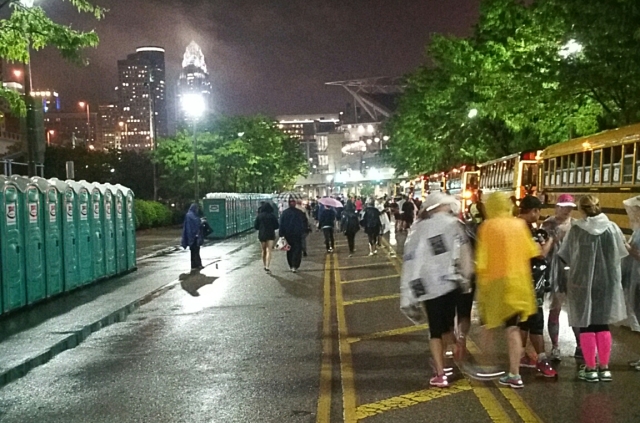 Gear check buses were organized by bib #.  I knew that my cell phone, keys, and extra clothing would be secure and dry.

I found a cushioned seating area in Paul Brown Stadium. The lines for restrooms were very long and I wondered why people were standing in line when there were plenty of facilities outside.  By this time the rain stopped and I had my feet kicked up eating a banana. 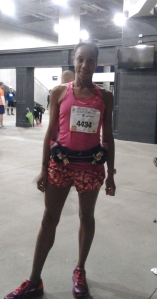 A band was playing and the atmosphere was so hype! I predicted a finish time of 4:00 at registration which placed me in corral D.  The first wave of corrals A-C went off at 6:30.  The next wave moved to the start as Prince’s 1999 blared from the speakers at 6:35.

The race began downtown, and we crossed to Newport, KY. I saw the Newport Aquarium on the left hand side.  Spectators showed love on the Kentucky side too.  My favorite was a group of ladies outside a retirement home with the cutest signs like “I thought this was Bingo” and “I thought they said 2.62.” 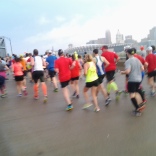 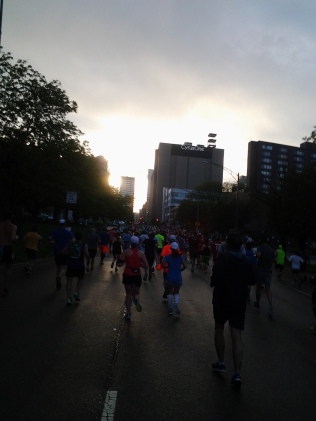 The sun was out and a misty rain at the same time.

I loved running down 7th Street.

Leaving downtown and getting ready to pass the Horseshoe Casino.

The man who told us there was propane in the last water stop to get us up the Eden Park hill.

This is why we train hills. 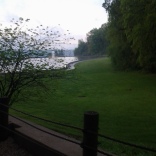 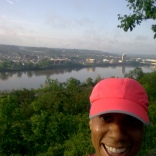 Got off the course to take a selfie of all the elevation that was covered in the first 7.5 miles.

I wanted to document this experience as much as I could through photos. After the half marathon and marathon split at mile 9, I realized with 17 miles to go I needed to focus on my feet and not my hands. 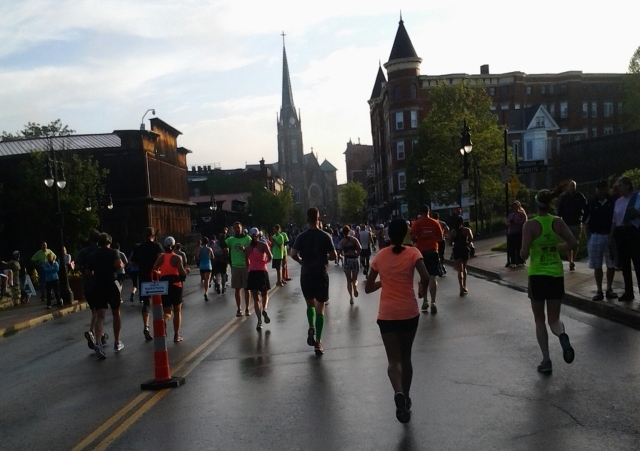 Everyone talks about the hills in Eden Park, so I was not expecting the smaller, unexpected elevation changes later in the race. Hill training is a must for Flying Pig!

The rain had completely cleared and I was drenched. I saw Laura from the Not Quite Ready for Prime Time running group in Louisville.  She mentioned how she adjusted her 2:00 half marathon finish time to 2:10 due to the heat.  I was wondering if I needed to do the same for the full marathon.

Wearing a hat made me feel warmer. I was wanting a Bondi Band and shades so bad.  I squeezed one of my French braids and sweat poured.  Fluids, fluids, fluids was my mantra.  One volunteer was insisting I take his water cup and took heed.  I mainly consumed Gatorade for electrolytes and used the water to wash down my Gu packs.

One of the toughest parts of the Flying Pig Marathon course was on Highway 50 West. The sun was over my left shoulder.  There was a Gatorade Energy Chew stop, and it did not settle well in one runner’s stomach.  The smell of vomit was not what I needed at this time.  What I did need were the various motivational posters that were placed in the grass off the interstate shoulder.

I was so happy to get off that highway and get to the home stretch. At this point I was telling myself to make it to Mile 20 and knock out the last 6.2 miles like it was one of my mid-week training runs.  My lower back was aching and my ankles felt like I was being tortured like the movie “Misery.”  I saw more and more runners pulling off to walk.

At mile 22 I took the Layup 4 Lauren Challenge. Volunteers handed out miniature basketballs for runners to take a shot.  I paused to square up my shot and missed.

The last few miles were a mental and physical challenge. I had so many thoughts going through my mind.  I told myself I only had a few more minutes to reach the finish. Spectators felt my struggle and pretty much yelled at me to keep going.  My shorts were rubbing on my thigh and I could feel chafing. 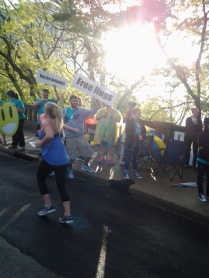 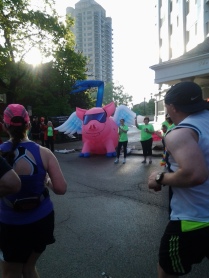 I could not believe how many people were lined up along the finish.  US Bank Arena area was crazy!  It was an overwhelming feeling.  I was so happy.  I wanted to pull out my phone, but I was so focused on hitting that timing mat to mark my completion.  A volunteer came up to ask was I OK.  I told him yes.  He said he would walk with me to make sure.  That was a classy touch on behalf of the race directors.  There was a lot of food at the line my digestive system was shut down. 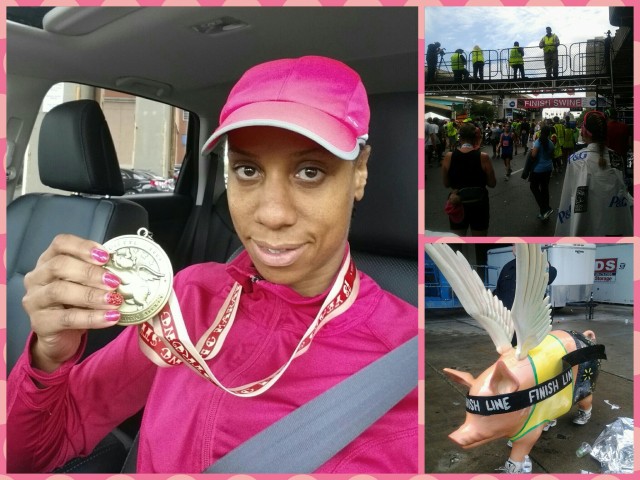 With my laid back approach to pace on this marathon, I am surprised to rank in top 21% overall and top 11% in both the women’s and age divisions. We were all struggling with the heat and humidity.  The best reward was coming out of this without any injuries.  I was recovered in one day besides treatment for chafing.

Teacher on the move.
View all posts by Kelsie Lou →
This entry was posted in Cincinnati, fitness, half marathon, health, marathon, running, Travel and tagged flying pig marathon. Bookmark the permalink.