My brother is living the bachelor lifestyle in Milwaukee, WI as a transportation manager in his post Army career. I thought it would be a good idea for my two Foster Daughters and I to raid his bathroom counter space with girlie toiletries and leave overwhelming scents of Victoria’s Secret sprays all over his bachelor pad.

You all know me. Runningintheusa.com to the rescue for an out of town race.  I discovered the Summerfest Rock ‘n Sole Races consisting of a 5K, Quarter Marathon and Half Marathon.  Summerfest is a concert series in Milwaukee that has over 800 bands on 11 stages, over 2 weeks.

There was no question that I would register the girls for the 5K. I decided at the last minute to run the half marathon and gave myself about 10 days to max out at 10 miles as a brief training.  With school being out and not really having a race schedule, my max mileage has only been 6 miles.

We took our time leaving so we could see Muhammad Ali’s funeral procession. There was no way I was leaving Louisville without experiencing a major part of history.  C went ballistic when she saw Will Smith.  I must admit, Jada’s husband does have a million dollar smile.

We made it to Milwaukee in about 6.5 hours due to traffic and construction. We met Brad at his job for keys to his place and went to the Italian Community Center for the Race Expo.  It was easy to find with free parking.  The area was busy because the Pride Festival was taking place in the same vicinity.

The half marathoners received gender specific tech shirts, and the 5K participants received cotton shirts. BMO Harris Bank is a major sponsor and they gave out free socks.  The usual vendors were there with gels, headbands, shoes, and gear.  Carmex was generous with samples along with Silk Yogurt.  We passed on the food samples, because I had dinner picked out at AJ Bombers.  At this point C realized she forgot her running shoes and would be doing her race in some Jordans.

AJ Bombers is the Travel Channel’s Food Wars winner for the Milwaukee Burger. We ordered cheese curds as an appetizer.  I would describe them as lightly battered cheese nuggets.  They were served with a chipotle sauce and the table got real quiet, meaning they were good!

We tried the Milwaukee burgers with fries and tots on the side. I could have eaten two, but I didn’t want to regret it the next day. We ordered custard to-go as we strolled along the Milwaukee River walk.

5K and Half Marathon Start:

The race director sent an email the night before stating there would be a one day heat wave with a chance of thunderstorms. This was not a day to push for a PR. The temperature was 72 ̊ with high humidity.  I noticed a majority of the half marathoners were not wearing hydration belts.  Even with 10 water and Gatorade stops along the course, I have to have my own fluids to consume as needed.

We took off onto 1st Street and I remembered seeing the temperature go up from 72 ̊ to 73 ̊ on a tower.  The saving grace was the overcast skies.  The field was crowded and finally thinned out as we looped Lincoln Ave and ran up the ramp to I-794.

I stayed to the right as I ran along the interstate. I knew I would be taking a ton of photos, and I did not want to interfere with the safety of others.  I spotted a runner who was barefoot and thought how brave he is for running on that hot concrete.  I know his feet have to feel like leather.  I can’t have all that going on.  My bunions are bad enough.

The views of Lake Michigan were therapeutic. I stopped for a photo at Hoan Bridge.  It wasn’t until after the race that I saw the official camera guy in the background.  Oops.  I messed up his photo.  I took another selfie as I crossed the bridge to show the elevation change. 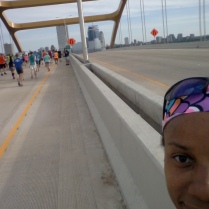 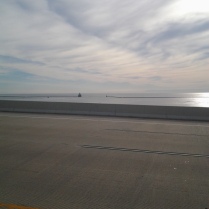 We made it back the Henry Maier Festival Park where there was a split for the Half and Quarter Marathons. There was a decent amount of crowd support.  I asked someone what this building was and they told me the Milwaukee Art Museum.  The design reminded me of a stingray.

Lincoln Memorial Drive was very scenic and I thought how the girls should be finished with their 5K by now. I told them to refuel and find a shady area to wait for me.  I wanted to finish under 2 hours even with all the pausing to take pictures.

One of my favorite course entertainments was a saxophonist at the Veterans Park. He was jammin’. 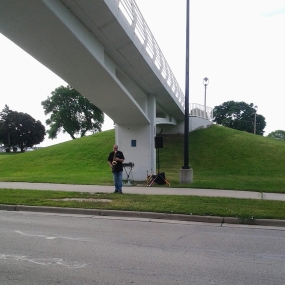 We followed along a residential area with motivational signs. Next up was the North Point Light House.

The route followed along Lake Park Golf Course, and finally we made the loop back towards Lake Michigan between miles 8 and 9. I remember there being a downhill section and I turned it up a notch.

We ran pass Bradford Beach and no one was out, but later that evening all the beaches were on Jam! It was so crowded that we could not find a place to park, and Brad was being all cautious with his new, pearl white Cadillac.

Anyway, the clouds were clearing and I came across the best stop along the course: Wet Towels.  I ran with that towel a few minutes as I cleaned the sweat off my body.  It was very refreshing, and I could feel a slight breeze from the lake.

At mile 12, I saw a man passed out and getting oxygen. It was a scary sight and a reminder of how treacherous the conditions had become.  I later found out that the official stopped timing the race at 2:18 due to the heat.

I killed it on that last mile because I knew there was a chance for me to finish under 2:00. I heard the girls yelling my name as I neared the finish line.  I grabbed some water and the potato chips were on point from all the salt I loss.

The half marathon distance is my favorite because I put in work, and I can carry on with my day as usual. The Rock ‘n Sole post-race was the best one I have experienced.  There was plenty of food, freebies, and photo set ups.  A tent was set up to get official times.  Voila!  I made my goal by 2 seconds!!

Participants in all races received the same medal but in different sizes.

I negative split on the final 5k. 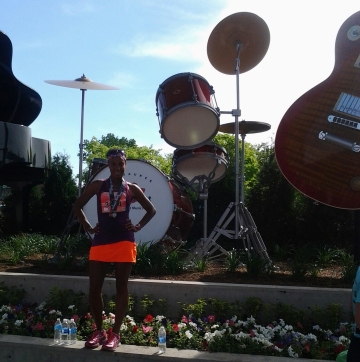 Brad wanted to take us to dinner at his favorite Mexican spot. His buddy from the army joined us with his family at El Fuego.  Being complete opposites with politics, music, and lifestyle makes for some interesting conversation.  We both think the other has “problems.”  He even called my parents to tell them about me.  It’s all love though. 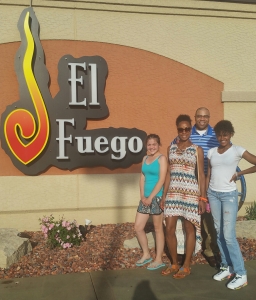 On Sunday, we took in a Brewers vs. Mets game. We about froze our butts off with a 30 degree temperature drop.  It was a good thing I snagged some deals at the outlets on fall gear.  It would have been nice if the weather was flip flopped for the race and the game. 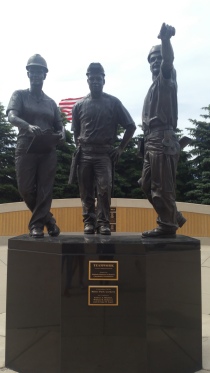 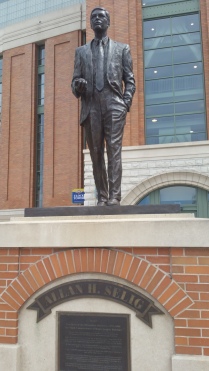 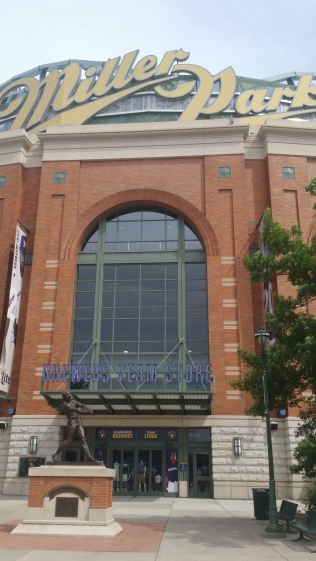 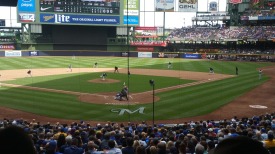 Brad wanted to take us to an Italian spot after the Brewers game, but I thought it would be nice to have dinner in Chicago on the way back to Louisville. As a foster parent, I am all about exposure to help my kids feel comfortable in certain life situations and have experience from different cultures.

I told C and L that they would taste some real Chicago style deep dish pizza. Not that hot and ready stuff.  We parked at Navy Pier and went straight to Giordano’s.  The wait was an hour, so we ordered then walked along the pier. 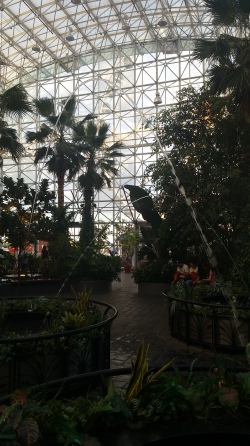 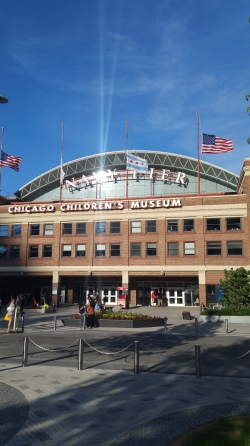 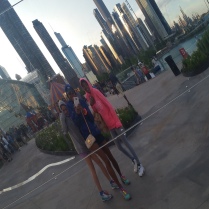 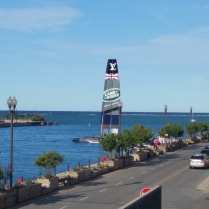 My Mother called being such a Mom asking what time we were leaving and concerned about me driving from Chicago so late. I told her I was living the life and it wasn’t like I had to go to work on Monday!  She had great news that she and my Dad finally closed a deal on a house in Florida!

Before I jumped on 94 I had to pull up on one of my homies Nixon, who I call Deep Dish. He’s a former co-worker of mine living his dream as a writer and film producer.

By the time I reached Gary, IN, I received a phone call asking for Kelsie Carter. I knew right away that it had something to do with my Ex Husband.  He was in ICU fighting for his life with various complications related to his injuries sustained as a teenager.  I was able to talk to him for 2 hours until he fell asleep on the phone.

After a short nap I was at the hospital before they made the decision to sedate him and put on a vent. This is why it has taken me so long to recap my Milwaukee Trip.  My last post was “Summer off to a Great Start,” but that phone call changed everything.  Although we are no longer married, we have grown to be Best Friends to the point I don’t like the label Ex Wife or Ex Husband because people assume we should be at odds.  We do more for each other now than we did when we were married, and unfortunately some people are jealous of our bond.  These last two weeks have been some of the worse of my life.

I must say that faith in God, running, my foster kids, family, friends, and at times being still have helped me deal with the void of not having my best friend to talk to because he is on a ventilator. This time last year, we were on a freakin’ helicopter in Vegas, poppin’ bottles in the Grand Canyon.  With life, you just never know.

Like my friend Gaines told me, I have run too many miles to be defeated.